BaseCamp will be built on Defco’s old factory site in Aarhus. The 17-story highrise tower consists of 570 small apartment units intended for students – all with their own bathroom and kitchen.

After a close and productive dialogue with the turnkey contractor, JFP, Industri Beton won the full precast concrete based on a SL-deck solution with a number of cost- and time saving solutions:

The project is expected to be finalized by the summer of 2022.

See images of the project
Maps were disabled by the visitor on this site. Click to open the map in a new window. 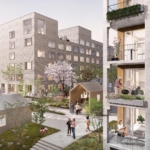