Hansakallio 3 is among Lujabetoni’s first SL-deck projects in Finland. The project consists of two separate building blocks with a total number of 75 apartments. Describing the reasons for choosing SL-decks for the project, Topi Laine, managing Director of Fira Oy, says:

“Thanks to the large width of the SL-decks, we have much fewer slabs to install and much fewer joints to cast compared to a traditional precast solution. In practice, the SL-decks accelerate the installation and on-site processes. Most importantly, we create better and higher quality homes for our customers while improving the quality of construction”.

In the project, Fira uses their own prefabricated bathroom modules, which the company has been developing for a long time. As it was possible to make recesses for such bathroom modules in the SL-deck, the on-site floor solution could be made very simple and cost-efficient. Another important factor reducing the construction time is the fact that the floor heating system is integrated in the SL-decks.

“Better thermal insulation properties of the SL-decks made it possible to eliminate a separate floor heating system with insulation on top of the slabs. Thus, one of the cost-related processes will be completely eliminated without compromising the control of the internal temperature,” says Topi Laine.

See images of the project
Maps were disabled by the visitor on this site. Click to open the map in a new window. 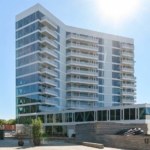