On the old plot for the Danish School of Journalism, 50 new family apartments and 300 student apartments will be built by JFP.

After a close and productive dialogue with JFP, Industri Beton won the full precast contract based on a SL-deck solution with a number of cost- and time saving solutions:

The project is expected to be finalized by the summer of 2023.

See pictures of the project
Maps were disabled by the visitor on this site. Click to open the map in a new window. 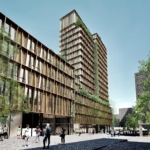